I meant for this blog post to be fairly short. But I got carried away and so here is my somewhat long story of how I transitioned from an aspiring to professional author.

Right away, I’ll admit that I’ve had an easy time of it, comparatively. This is my first completed novel, and it went to the fist publisher to see it. That’s not to say it wasn’t difficult, and stressful, and frightening at times, but the whole process was shorter than many.

I dabbled with writing as a teen, starting and abandoning a truly heinous third of a fantasy novel in California, which was an utter mess of tropes. But I bonded with my future husband over it, because he was writing a novel as well, so all was not lost. His novel is salvageable. Mine most definitely is not.

I then decided to focus on reading instead, and so for the next few years I read 100-150 books a year, in all genres: classics, sci fi, fantasy, YA, contemporary lit, graphic novels, memoir, nonfiction, what have you. I was and am a promiscuous reader, though SFF was my true love. I wrote reviews of them for a time, several of which are still scattered about Goodreads, which helped me pinpoint what I liked and disliked about certain novels, regardless of format or genre. My favourite books tended to be ones that meshed several genres.

At university, I bounced between several majors and settled on English literature and creative writing. I wrote some short stories and poetry. I placed in a few poetry/fiction contests, which gave me some cautious optimism that I was a halfway decent writer. I came up with a cool idea for a novel and researched and started it, but my confidence flagged and I kept setting it down.

After I graduated university, I moved 6,000 miles to be with the afore-mentioned husband. I had my shiny piece of paper and thought doors of employment would magically open to me now that I had a degree.

I ended up working some very boring jobs that kept my hands busy but required no mental effort. And so I started daydreaming, and returned to that novel idea I had come up with in 2007. This time, I decided to write a “backstory” of my character, Micah Grey, as a teenager. I day-dreamed the plot while I filed, thinking up various scenes and sometimes scribbling during my lunch and tea breaks. I started it in December 2009 and finished in March 2011, while also occasionally working on the adult novel. I then promptly subbed the novel about the teenage Micah to Angry Robot Book’s Open Door Month.

That was a newbie error. You probably shouldn’t sub a first draft. But, I had no expectations of getting past the first round, and I was proud that I’d sent it off and harboured a tiny, little hope that they’d like it anyway. I subbed on the second to the last day. I didn’t show my cover letter to any of my friends because none of them had read the book and I didn’t want to spoil the plot. I wasn’t sure if it was even an adult novel or a YA novel—it seemed to me like it could be either. I’m glad I didn’t know as much about the publishing world then as I do now, or I would never have been brave enough to send it off with nothing but a deep breath and some crossed fingers.

Three months later I got a nice email message saying they’d enjoyed the first 5 chapters and would like to see the rest, signed by someone called “Amanda for Angry Robot.” I was road-tripping around the East Coast of the USA with my mom, and I hadn’t been on the internet that much. I saw it, freaked out, and really quickly read through the whole thing one last time while my mom drove from DC to Philadelphia, finding some last-minute typos and reading some of the sticky bits out loud.

And I sent it off again, certain it’d get rejected but hoping anyway.

One month later, I went to Amsterdam with my best friend, who was visiting from California. I should note that I’m not constantly traveling, by the way. I had a carefully neutral email from that very same Amanda for Angry Robot, asking a question about my book and if I had plans for a series. I sent her an email back and then flew back to Scotland.

And the next day I got another email saying that I’d gone to editorial! Said best friend, Erica, did not miss the opportunity to take a photo of me freaking out. So here’s me, without makeup, very excited. And very pink. 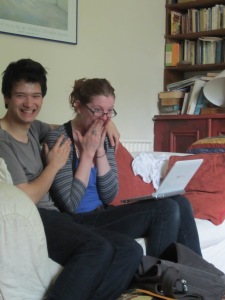 She also mentioned that she felt the book was more YA, but that she did know that Angry Robot were thinking of going in that direction. And so I started biting my fingernails and waited.

And waited. I had very short fingernails for months. They’re only just now starting to grow back.

You hear about the glacial pace of publishing all the time, but here was my proof of it. Every morning I’d rush to my inbox, certain something would be there. The weeks passed and obviously the level of panic I had at the beginning subsided, replaced by a low-level anxiety.

I also committed more newbie publishing errors: I started querying this book that was not ready, with an absolutely awful, 600+ word query letter monstrosity for the first ten or so, and then a more manageable 250 word query for the others. But that 250-word query letter was still pretty terrible, mainly because the manuscript had some lingering issues. Learn from my mistake: don’t do this. I burned through 20 or so agents, wasting their time and mine. I did more research than some, but I could have done a lot more.

During the wait, I turned to people online, which ended up being really helpful. 20-something of us made it to the editorial level out of 1000 or so submissions to AR’s Open Door Month. Most of us congregated on AbsoluteWrite’s Open Door Waiting Thread, and we ended up creating our own little private forum (calling ourselves the Anxious Appliances) where we could angst without the Robot Overlords potentially lurking. I’ve made some really close friends through this, and even though the Open Door period has long since passed, we still post on the forum. I’ve beta-read most of their work and we’ve given each other advice and shared resources. I hope our forum continues well into the future.

Additionally, I met Anne Lyle on Absolute Write, an Angry Robot author. Because I had someone I could speak to, I decided to go to FantasyCon in Brighton in late September. I found out that I really liked conventions and meeting other authors and industry professionals. I also met Amanda. I had a very scary but cool lunch with Angry Robot, where I pushed salad around on my plate and hoped I didn’t look as petrified as I felt.

I went to editorial in mid-July. I received my next verdict in late November. Amanda was the one who emailed me, because now she was no longer the reader—she was an editor in her own right of Angry Robot’s new YA imprint, Strange Chemistry. She gave me suggestions and then over the next few months, I worked really, really hard on my MS.

I finished the rewrite on leap year, 2012, and it felt auspicious to query the same day. The last agent I queried ended up being the one to offer. Juliet Mushens of Peters, Fraser & Dunlop requested the MS in 5 minutes, sent me an email an hour later saying she was loving it, and offered the next day. We spoke on the phone and just clicked. I knew there was no way an agent would be more enthusiastic an advocate for me than Juliet.

Amanda read the new version, loved it, and everything just clicked into place. I received The Call two days after Juliet offered, and now a day before Eastercon, I’m out there. I’m an author! There’s no going back! Not that I’d want to.

But it’s a heady rush of emotions. Elation, terror, painful excitement, holding in the burning desire to tell everyone but not being allowed to just yet. My book will be out there. Some people will love it, some people will not. A year ago, if you’d told me this is what would happen I have laughed. I’ve loads of other milestones to look forward to. So here we go.

Thanks for reading me prattle on, and I hope you’ll take a look at Pantomime in February 2013. You can read my press release here.  To read the first chapter, click here.