For a limited time, Pantomime (and other awesome SC titles!) are on sale for ebook to celebrate Strange Chemistry’s first birthday.

It’ll only be a limited time, so if you’ve been meaning to buy Pantomime for your Kindle, now’s the time, and the sequel, Shadowplay, is just around in the corner in January. Please help spread the word–I’d love more people to take a chance and pick up Pantomime.

Where to go: Amazon UK / Amazon US / Nook

R.H. Ragona’s Circus of Magic is the greatest circus of Ellada. Nestled among the glowing blue Penglass – remnants of a mysterious civilisation long gone – are wonders beyond the wildest imagination. It’s a place where anything seems possible, where if you close your eyes you can believe that the magic and knowledge of the vanished Chimeras is still there. It’s a place where anyone can hide.

Iphigenia Laurus, or Gene, the daughter of a noble family, is uncomfortable in corsets and crinoline, and prefers climbing trees to debutante balls. Micah Grey, a runaway living on the streets, joins the circus as an aerialist’s apprentice and soon becomes the circus’s rising star. But Gene and Micah have balancing acts of their own to perform, and a secret in their blood that could unlock the mysteries of Ellada.

And don’t forget to take a chance on some other SC titles, links to which can be found on Strange Chemistry’s website here.

This past weekend I went to Amsterdam for a family reunion with my aunt Ginger, cousin Paul, cousin Dylan, who just had a beautiful baby girl named Ava with his wife, Rixt, cousin Lonnie and his wife Dawn and daughters Genevieve and Isabelle. I stayed with awesome Corinne Duyvis who made me delicious poffertjes and showed me around Amsterdam a bit.

YALSA’s the Hub has made a handy dandy graphic guide to YA Novels with LBTBQ Characters. The full post can be found here. I’m absolutely delighted that Pantomime is featured. It’s been shared on Tumblr and has gotten over 19,000 shares, which is so wonderful. I’ve pasted the bit below which has Pantomime, but please do check out the full graphic!

On Tuesday, August 6th, I took the train up to Inverness for my first Book Festival appearance at Eden Court. The festival is on until Saturday, so here’s the website with the programme if you know anyone in the area. It’s run in part by Sandstone Press, who are in a way book cousins with Angry Robot/Strange Chemistry, as they’re both distributed by Faber and Faber in the UK.

Before the event, I met the chair of the panel, Kelsey Moore, who is another displaced American who has moved to Scotland. She works for the Moniack Mohr creative writing centre, which is located not far from Inverness. It seems like a wonderful writing centre in a gorgeous setting that runs programmes most of the year, some which are Arvon and some which are not. Kelsey was an excellent chair and really helped put my nerves at ease.

The audience at the even was small but enthusiastic, asking excellent questions about Pantomime, my writing process, and the world-building. We touched on the subjects of being an outsider, the role of technology in Ellada, the importance of names, and the melding of different genres. Afterwards there was a brief signing and one girl even asked to take a photograph with me, which was very sweet!

I got to meet one of my online writing friends, Emma Maree Urquhart, which was lovely! We chatted away and all too soon she had to catch the bus home, but I’ll see her again at World Fantasy Con.

The rest of the time was relaxing in Inverness, which was lovely even if it was raining heavily most of the time. It was a nice wee break in the Highlands.

A huge thank you to everyone at Eden Court & Sandstone Press for arranging the event and being so welcoming. 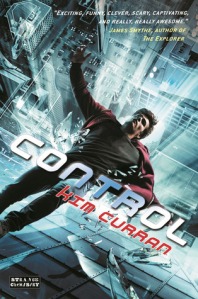 1. Control – Kim Curran. The excellent followup to Shift, about a boy with the power to undo any decision he’s ever made, and it came out in the UK yesterday so you should all go buy it.

2. Shadow of the Wind – Carlos Ruiz Zafon – I read this as a teenager during the height of the hype, and was left a little cold by it. I re-read it when we went to Barcelona and absolutely fell in love with it, perhaps as a result of being older, being a writer, and being in the city where it was set as I read.

3. The Weight of Souls – Bryony Pearce. This also came out in the UK yesterday, and you should also buy it! Taylor Oh receives a mark if she’s touched by a ghost must avenge that death before the Darkness comes for her.

4. Code Name Verity – Elizabeth Wein. I finally read the book which I’ve heard so much about, and I enjoyed it.

5. The Devil of Nanking – Mo Hayder. I read this a few years ago and it absolutely haunted me. I re-read it, and unlike a lot of books, I still remembered it very clearly. Such a good book looking at the history of Japan and China through the lens of a troubled English girl in modern Tokyo. Though that doesn’t even really begin to describe it.

7. Stolen – Lucy Christopher. A gripping tale of a girl stolen from an airport and forced to live in the Australian outback with a troubled young man. Very gripping–I read it in a day.

8. The Willful Princess and the Piebald Prince – Robin Hobb. My mom sent me the hardback for my birthday. I loved this short novella about the piebald prince, though it felt like it could easily have been spun out into a full novel.