Today is my birthday! Last night, the third Vestigial Tale went live. I liked the idea of having something out on my birthday – it’s like a two-way present. If you purchase it it’s the best present because you’re supporting my work, and you hopefully get a story you enjoy in return.

This is the longest of the four stories I’m releasing, at 25k. I really enjoyed writing this story. It stars Cyan, a prominent character in Shadowplay. This can be read on its own before reading the Micah Grey books, but you’d probably get more out of the story if you’ve already read Shadowplay and met her through Micah’s eyes.

This is exclusive to Amazon for 3 months, after which time it’ll go up on Smashwords and other distributors. That means that if you have a Prime membership or joined Kindle Unlimited, it can be borrowed for free and I’m still paid for it, which is a nice perk.

Please consider purchasing. All proceeds from these sales are being earmarked for self-publishing Micah Grey #3, which should be released next year. So far I’ve made enough to cover ISBNs and some to help recompense Dianna Walla for her amazing art. Any money made this month will go towards Micah Grey #3 cover art or editing costs. 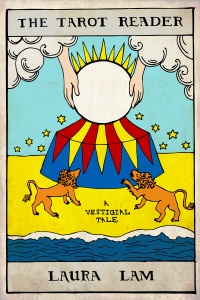 Untold centuries ago, the Archipelago was ruled by the Alder—mysterious beings who vanished, leaving behind only scattered artefacts of unknown power, called Vestige. Sometimes, a person will be lucky or unlucky enough to discover that each piece of Vestige has its own tale to tell…

Cyan Zhu is the best tarot reader Riley & Batheo’s Circus of Curiosities has ever seen. Too good, some say. She reads the cards, but she can also tell more about her customers than they could ever suspect. Two people walk into Cyan’s cart to have their fortunes told and change her life forever: Oliver, a sailor with a pretty grin, and a mysterious man with a blurred face, who sends her terrible visions that might come true.

Vestigial Tales are stories set in the world of the award-winning Micah Grey series. Step behind the circus ring from Pantomime, the theatre of Shadowplay, and more…

One thought on “The Third Vestigial Tale: “The Tarot Reader” is now Live!”