Last weekend was the 2nd annual Nine Worlds Geekfest at Heathrow in London. Last year I heard nothing but amazing things, so I was glad I was able to go this year with my friend Erica, who was visiting from California.

I arrived Friday morning, with just barely enough time to check into the hotel before my first event. Note to self: don’t do that again. It was a bit stressful as I didn’t get a chance to unwind so I was more nervous. My workshop was writing LGBTQ+ Characters in SFF. I think at least 50 people showed up in the end, which was fantastic. I had people do a brief character sketch at the beginning of the workshop and then went on to discuss the importance of well-rounded characters, what are common stereotypes and how to avoid them, the difficulty of queerbaiting in fandom, and a few other subjects. I tried to have a lot of interaction with the audience so it wasn’t just me yammering on the entire time, plus some people in the audience were able to answer certain questions far better than I could. At the end of the workshop, I had people share some of their character sketches if they wanted, and the ones shared were of many sexualities or gender identities.

Later on I attended to “Looking Forwards” panel with Lauren Beukes, Nick Harkaway, Sarah Lotz, and Fabio Fernandes. It was an excellent panel, discussing what the future holds and what that means for the fiction we read. Superheroes came up, and Lauren mentioned how there was a group of vigilantes in South Africa who would serve justice without concrete proof if they believed the person deserved it, which of course raises a lot of questions of what is justice. Nick Fabio mentioned his native Brazil, and Sarah mentioned being a recent victim of violence and how a surveillance state in certain respects doesn’t scare her–had she been watched by CCTV, perhaps that violence could have been avoided, for instance. Harkaway also mentioned that he’d rather everyone in the world was 1% nicer and more empathetic rather than having a superhero, as that could make a much bigger difference to the world.

Afterwards I had dinner with Team Mushens (authors represented by Juliet Mushens), as there were many of our posse in attendance. The con menu at the hotel restaurant was not the best, and we had the angriest waiter ever. Peter Newman was a brave man, asking for the tap water we ordered three times until we finally received it after about 45 minutes.

Next, I had a reading on the first night of New Voices. Stephanie Saulter had a brilliant idea last year to get a large group of new writers together to do lots of short readings, as it’s difficult as a new writer to 1. fill a room when you’re an unknown 2. read for half an hour or so when you’re still new to this whole reading-in-public thing. So there were a bunch of writers reading for 5 or so minutes. I was planning on reading good old Pantomime, but Juliet told me I should read from my new book, and I listen to her, so I did. It was the first-ever reading of False Hearts and it seemed to go down well. I really enjoyed the other readings as well, especially the Seventh Miss Hatfield by Anna Caltabiano, which was just released last Thursday.

Saturday, Erica and I meant to get an early start for some 10am panels…but that didn’t happen. Kim Curran and I went to the Brain Hacking tech demo through the Future Tech track, though, which was brilliant. Two PHd students were discussing the ways we currently map brains and how electrical stimulation can affect learning new tasks. I’ve studied this topic a fair amount for False Hearts so it was relevant to my interests. They also showed how you could make your own brain stimulator, but as soon as they put up the electrical diagrams, I knew it was far beyond my non-engineer capabilities. Maybe I can get someone from my work to help me make one…? 😉

After a brief break for food, it was back to see “Where are the Women in the Creative Industries?” with Kim Curran, Juliet Mushens, Laurie Penny, Shalegh Rowan-Leg, and Dr Will Brooker. The panel looked at women within journalism, film, advertising, and publishing, discussing how strides are being made but there’s still a long way to go for total balance.

The next panel I attended was “Westerns: They’re Your Huckleberry,” which had Jared Shurin moderating Will Hill, Stark Holburn, John Horner Jacobs, and Joanne Harris (of Chocolat fame). There was a lot of discussion about how at the moment Westerns have been amalgamated with many other genres, but perhaps there will be a resurgence of straight Westerns again soon.

That evening there was the second New Voices panel, which had plenty of Team Mushens again in attendance. After yet more Cards Against Humanity, Saturday came to a close.

Sunday the first panel we went to see was the African Speculative Fiction Panel. It was interesting, but the entire panel was white. It wasn’t meant to be–one of the panelists was in a car accident on the way in and he was okay, but it meant at the last minute a few more panelists came on. It still meant that there were no black African voices heard on the panel, which I found problematic.

I was meant to have a signing at 1 pm, but I got the times messed up and thought it was 2. So unfortunately I missed my own signing, but at least a few people found me later on and got me to scribble on their books. 🙂

Next, I went to see the Epic Fantasy panel with Scott Lynch, Gaie Sebold, Rebecca Levene, Elizabeth Bear, and moderated by Den Patrick. I particularly enjoyed their discussion of using and subverting tropes to reflect the world we live in today.

At 5 pm, I had my last event, which was participating on the panel for Female Protagonists in Young Adult Literature with Juliet Mushens, Anna Caltabiano, Tom Pollock, and moderated by Rowan Williams-Fletcher. We discussed what do people really mean by “strong” female characters, does strength necessarily have to be physical, or does it mean women taking on more traditionally male characteristics, for instance. It was a great discussion. 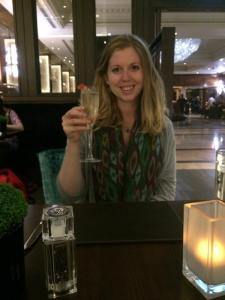 By that time, I was definitely flagging, but I had a nice, lower-key evening. I had dinner with my agent, Juliet, and we toasted my recent deal, and then we played Cards Against Humanity until it was time to sleep and finish the first con.

As so many people have said, Nine Worlds is a particularly special con. It stands out from the rest – it’s overall a younger crowd, it mixes ALL sorts of geekery tracks, cosplay is encouraged. I loved that I could go see things on the future track or crafting panels as well as books and literature. The con itself is very respectful of everyone and it’s a safe space – there were gender neutral bathrooms, quiet rooms if you needed a place to unwind for a bit, and a firm harassment policy was in place. It was my first year going but I think I’m going to make it a priority con for me.

Next post…the events between the two conventions!